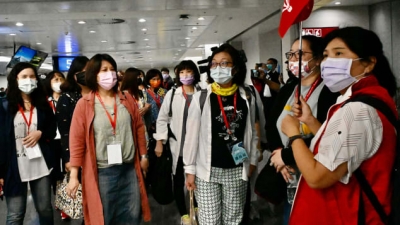 06.04.2021
The islands of Palau and Taiwan have opened a reciprocal travel lane, allowing residents of both places to travel back and forth quarantine-free provided they follow certain guidelines.
The bubble, which Palau is calling a "sterile corridor," kicked off on April 1. The first flight, on Taiwan's China Airlines, is scheduled to leave Taipei's Taoyuan International Airport at 2:30 p.m. and is due to arrive in Palau at 7:30 p.m. local time. Palau is one hour ahead of Taiwan.

Rules for participating are strict. Travelers on the first flight had to show up to the airport five and a half hours early so that they could be tested for Covid-19 on-site. The passengers' test results were expected to arrive by 1:00 p.m., at which point they would get the all-clear to begin boarding.
And that's not the only restriction.
Would-be vacationers must join up with one of six government-approved tour groups and are required to stick to strict itineraries. The respective governments have lists of approved attractions and hotels, while mask-wearing in public is mandatory.
Tour itineraries include trips to Palau's famous "jellyfish lake," a tour of the Japanese shipwreck at Lake Yamanaka, snorkeling opportunities (which include lessons for newbies), a visit to Chang Causeway Park (known as the world's smallest national park), kayaking, an afternoon tea experience, a mud bath at Milky Lake (famed for its beautifying mud) and shopping.
A typical four-day package costs TWD75,000 ($2,600), while a five-day itinerary is around TWD95,000 ($3,300).

But not everyone is pleased with the news -- or, at least, its implications.
China considers self-governed Taiwan to be part of its territory and strongly rejects any claim to the contrary. As a result, only 15 countries and territories -- including Palau -- have official diplomatic relations with Taiwan.
"I want to emphasize that the one-China principle is a recognized norm of international relations and a universal consensus that the vast majority of countries in the world agree to, accept, and practice. Adhering to the one-China principle is the trend of the people's hearts," Zhao Lijian, spokesperson for China's Ministry of Foreign Affairs said in a press statement on March 29.