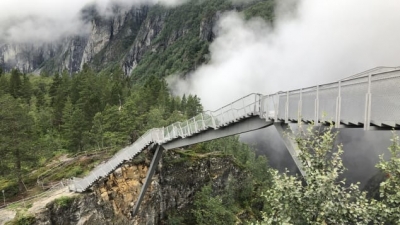 24.08.2020
This is the dramatic Vøringsfossen waterfall bridge, a newly opened tourist attraction offering incredible views of the spectacular landscape near Eifjord in Hardanger, western Norway.
The project, designed by architect Carl-Viggo Hølmebakk, has been over a decade in the making. Now it's finally ready for brave visitors willing to traverse the 99 steps connecting the two sides of the stunning Måbødalen valley, in exchange for an unparalleled view of the tumbling waters of Vøringsfossen.
The bridge is just one part of a series of new developments around the waterfall aiming to make the popular spot even more attractive to visitors. The entire project, which also includes new viewpoint platforms and footpaths, will cost over $4,400,000 and is due to be completed by 2022.
"The bridge is, of course, the heart of the project, that connects two sides of the river and the waterfall together," Hølmebakk tells CNN Travel.
Hølmebakk and his team wanted the design to seamlessly fuse the natural and the man made -- they closely studied the local landscape, scanning the terrain with digital equipment, ensuring they didn't damage the environment.
Some, the architect admits, may see the concept as controversial. And those with a fear of heights may want to steer clear.
But for many the bridge will become yet another reason to visit Vøringsfossen waterfall, already one of Norway's top destinations.